So those funny fellas over at the infamous 4chan are claiming that the latest Kavanaugh accuser was setup by one of them via a burner phone and it’s why the “creepy lawyer” as he is called in some circles disabled his Twitter account (at the time?) 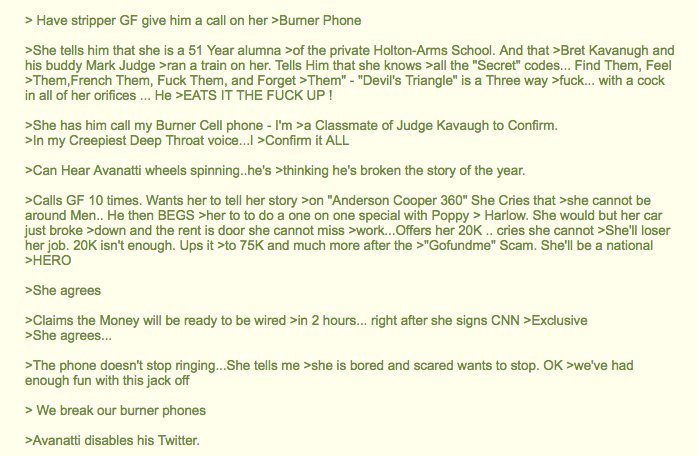 “I’ve never wanted something in my whole life to be true as much as I want Avenatti getting 4Chan pranked to be true.”

“Did Stripper Matlock get punked by a bunch of 4Chan frogs?”

“@MichaelAvenatti owes it to America right now to answer about this 4chan rumor.”

“I’m not saying that Michael Avanetti got totally owned by a 4chan prank. But if he did, and if he also gets disciplined or even disbarred for falsely maligning a federal judge, or even prosecuted for sending false or misleading information to the Judiciary Committee…”

“If Avenatti really was punked by 4chan, I may have to head down to my local bar and buy everyone a round.”

I tell ya, some times them boys are worth a good laugh or two. And as always, they do it for the LULZ, for the laughs my gentle readers. What do you think of this particular revelation? Do you hope it’s true? Do you think it’s true?

Shout out in the comments below and let us know what you think.