Police in Charlotte have released photos of a suspect wanted in connection with leaving a threatening and racially-charged note outside a store on Thursday. An hour later NBC released photos of the suspect accused of writing it. See below the video for the letter.

Turns out it wasn’t a “white supremacist” at all… have a look.

EXCLUSIVE: Surveillance video from last night's hate crime and arson in east Charlotte. I'll show you video of the fire at 5 on @wsoctv pic.twitter.com/bPgxw2ovNE 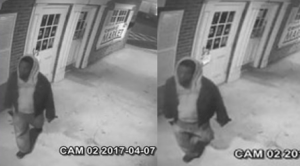 Our newly elected president Donald Trump is our nation builder for white America. You all know that, we want out country back on the right track. We need to get rid of Muslims, Indians and all immigrants. Specially, we don’t want business run by refugees and immigrant any more.

We are ready to wake up some of our great state including North Carolina and we will take care of the country. Immigrants and refugee are taking our job, doing our business and leaving us standard. So, you are not allowed to do business any more.

We know you are one and many of other immigrant doing business here. This is our warning. Leave the business and go back where you came from.

If you don’t follow this warning then we are not responsible for the torture starting now.