I have never understood the left’s creepy obsession with President Trump’s young son Barron Trump. He’s just an innocent child. When Obama was in office, you couldn’t say anything that was remotely derogatory or critical about his daughters. But once Trump was elected, leftists went off the rails on Barron Trump, saying the nastiest things about him imaginable. Things keep surfacing that really make you wonder if those in Hollywood, the media and on the left have embraced evil and have just lost it. Another sick incident has now come to light that adds to the pile of stories, pictures, and jokes about raping or s******y abusing children of all kinds, especially Barron Trump.

Justin Roiland, the co-creator of Cartoon Network’s Rick and Morty cartoon show, evidently tweeted a disturbing image of a nude, below the waist Barron Trump a year ago when he was eleven-years-old. Barron is now twelve. The caption on the sketch reads, “Donald Trump forcing baron to play VR, while homer and Peter eat smurfs nearby.” I just have to wonder at the kind of twisted imagination it takes to think about something like this so much that you are compelled to keep it and then Tweet it out to your followers. This guy, in my opinion, needs a mental intervention because usually talking, and in this case tweeting, about a child you wish to abuse happens just before you act on your twisted fantasies. It’s textbook.

Roiland tweeted the vile drawing back in April of 2017. But it only surfaced this month and the private bits have been covered to make this viewable. It makes it even worse that it is a children’s cartoon producer, editor, and writer who did this. And we wonder why cartoons anymore are not fit for our children to watch. The cartoon is signed, “Jim Davis,” although it is not certain the Garfield creator actually did the drawing. The drawing, however, has been on Roiland’s verified blue check mark Twitter account since April 2, 2017. An email inquiry to Jim Davis’ company, Paws, Inc., was not returned when a site named Gateway Pundit tried to contact them. 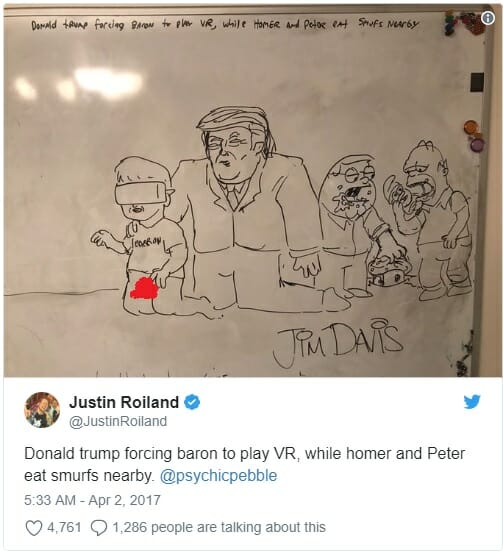 One of the first comments that took exception with the drawing was posted just hours after Roiland posted the drawing on April 2, 2017. Minecraft creator Markus Persson, aka @Notch, asked Roiland, “so.. uh… why isn’t baron.. wearing.. uh.. pants?” That’s a very good question and we still don’t have an answer.