I think by now we aren’t nearly so surprised to find out that Hollyweird has some serious issues with honesty.

I suppose it goes with the territory when you think about the fact that to be an actor or a performer (at least on the big screen) involves becoming someone else for the duration of the shoot. The effort to become someone else is certainly monumental if the performance is to be believable. Comedians have to be on stage, live, in front of a different audience every time they walk out, and sometimes some things get said that can come back to bite them even if they were juveniles at the time.

Kevin Hart’s recent experience with Hollywood duplicity is a case in point.

More from the Conservative Tribune:

English clergyman Frederick William Robertson best summed it up about hypocrisy. “There are three things in the world that deserve no mercy: Hypocrisy, fraud, and tyranny,” Robertson famously said. Hollywood, at least in 2018, seems to hit at least two of those check marks, if not all three.

As I’m sure you’ve heard by now, comedian Kevin Hart has been removed as the host of the Academy Awards telecast after internet sleuths dug up old comments he had made regarding gay people.

“One of my biggest fears is my son growing up and being gay. That’s a fear,” Hart said in his 2010 stand-up special “Seriously Funny.”

“Keep in mind, I’m not homophobic, I have nothing against gay people — be happy, do what you want to do,” Hart joked. “But me, being a heterosexual male, if I can prevent my son from being gay, I will. Now with that being said, I don’t know if I handled my son’s first gay moment correctly. Every kid has a gay moment, but when it happens, you’ve got to nip it in the bud.”

Hollywood, ever the self-proclaimed bastions of “tolerance,” pounced on Hart for his comments from eight years ago. Blind leftist followers similarly followed suit and attacked Hart, slamming him as a “clueless” bigot. Not everyone in Hollywood was willing to attack Hart, however. Fellow comedian and entertainer Nick Cannon quickly took up the mantle to slam the fraudulent and hypocritical behavior of his peers.

“Interesting, I wonder if there was any backlash here,” Cannon pondered on Twitter in response to comedian Chelsea Handler flippantly using a gay slur to describe a photo of a bird. 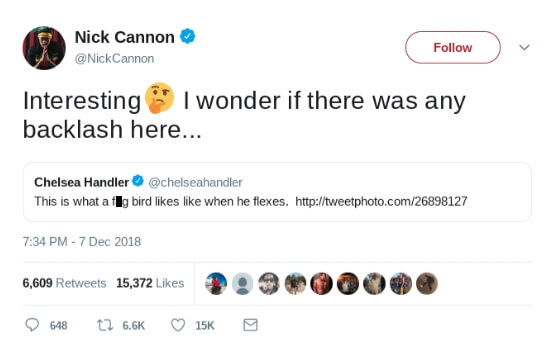 Next, Cannon took aim at “Wreck It Ralph” voice actress and comedian Sarah Silverman, who also used a gay slur to describe a contestant on “The Bachelorette.” 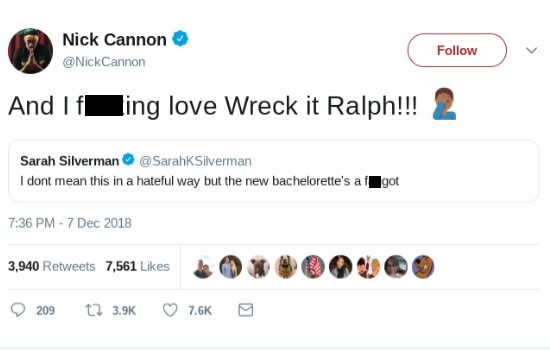 Finally, Cannon called out comedian and actress Amy Schumer, who used a similar slur when talking to her Twitter followers about the movie “Skyfall.” 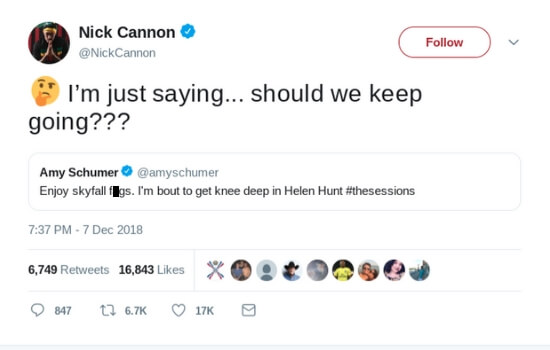 As Cannon pointed out, where was the outrage over these comments?

Oh, that’s right, it was nowhere to be found. Now, I don’t want to laud the notoriously anti-Trump Cannon too much here, but he certainly deserves credit for his willingness to lambaste his peers over their blatant hypocrisy.

One more thing worth noting is that Hart apologized on Twitter for his comments and to the gay community. The comedians that Cannon called out have offered no such remorse. The way in which Hollywood elites pick and choose victims for their outrage of the week is nothing short of tyrannical. And hey, that’s the Frederick William Robertson trifecta. Hollywood truly deserves no mercy.

I like it! This gives me hope that Nick may at some point have a Red Pill moment and get aligned with BLEXIT and the #WalkAway Campaign. Both of those organizations have former liberals at the point and are staunch supporters of President Trump and conservative policy issues that affect all Americans. What’s not to like about that?