Here is the information from Snopes:

“Claim: In 2018, White House Press Secretary Sarah Huckabee Sanders was listed as one of the 10 “most admired” women in the United States.”

“Origin: White House Press Secretary Sarah Huckabee Sanders has been the subject of intense scrutiny and criticism as one of President Donald Trump’s chief spokespersons since his inauguration in January 2017.

Her consistent defense of sometimes vacillating and even contradictory statements by Trump, as well as her occasionally combative style have made her the subject of ridicule by late night talk show hosts and in Saturday Night Live sketches. In April 2018, comedian Michelle Wolf targeted Huckabee Sanders in a controversial monologue at the White House Correspondents Association dinner.

It might come as a surprise, then, to learn that many members of the American public admire her more than nearly any other woman in the world. In May 2018, the “Trump 2020” Facebook page — which is not affiliated with the president’s official re-election campaign — made just such a claim, posting a meme which read:

Congrats to Sarah Huckabee Sanders. Sarah was just named as one of the ten most admired women in America. This is true. In April 2018, the UK-based polling firm YouGov published the results of its “World’s Most Admired” survey. Respondents in the United States ranked Huckabee Sanders the ninth most admired woman in the world. (You can view the United States’ rankings by choosing “USA” from the drop-down list of countries.)

By some distance, the man most admired by American survey respondents is former president Barack Obama. His successor, Donald Trump, was ranked second, ahead of Pope Francis, Dwayne “The Rock” Johnson, Clint Eastwood and Vermont Senator Bernie Sanders — all of whom appeared in the top ten.”

Here’s a screenshot of the list of people most admired by Americans in 2018. This chart is courtesy of YouGov. Some people might get the creeps after they see some of the names on this list. Judging by the results, it seems like more Democrats were polled than Republicans. Polls like this should be done equally among political parties to help eliminate any potential for bias in either direction. 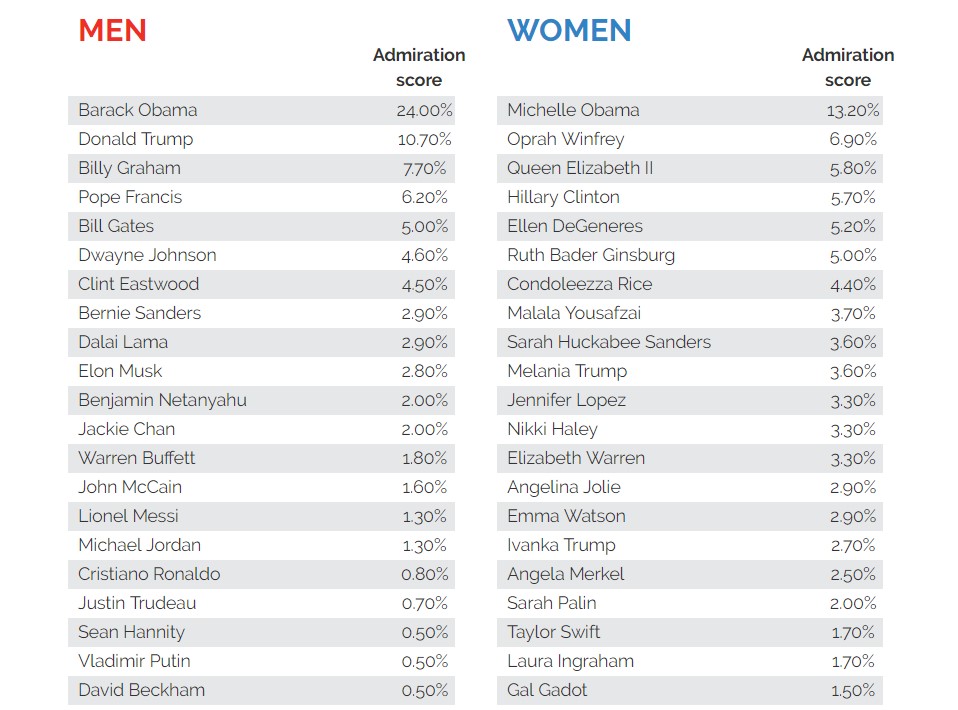 And here are some of her BEST moments defending President Donald Trump:

Deep State CIA Director Gets Dragged To Grand Jury – Obama Better Hide!
Maxine Waters Set To Lose It All After Trump Busts Her In BIG Lie – LOCK HER UP For Good!