CNN’s Jim Acosta evidently never tires of making an outright fool of himself. Ever. Every time I see the guy, I can’t help but think… what is wrong with you? Narcism run amok and absolutely no reporting professionalism at all. It’s embarrassing.

This time, Acosta decided to go to our southern border with Mexico and report on what he claims is a non-existent national emergency. He took to Twitter to prove that there is no national emergency or humanitarian crisis and to call President Trump a liar. “I don’t see anything resembling a national emergency situation,” Acosta tweeted on Thursday from McAllen, Texas. 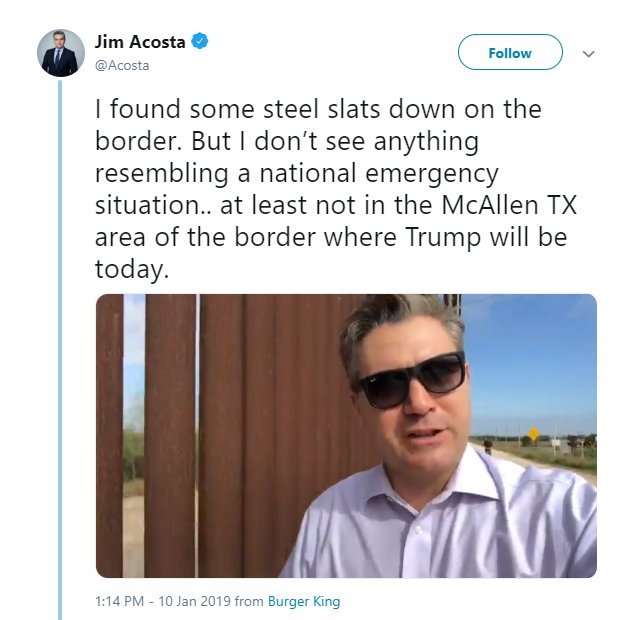 Sometimes, however, karma comes calling and this was one of those times. CNN – his own network – reported that at least 20 bodies were found incinerated in their vehicles. That would be at the hands of the Mexican cartels. You know… non-existent criminals who have a soul per Nancy Pelosi. “Mexican authorities found at least 20 bodies, most of them burned, along a dirt road in the northern state of Tamaulipas near the US border, officials said,” CNN tweeted. Reality bites Acosta in the butt royally.

From the CNN report:

Mexican authorities found at least 20 bodies, most of them burned, along a dirt road in the northern state of Tamaulipas near the US border, officials said.

The bodies were found Wednesday afternoon near four charred pickup trucks and a sedan in the rural community of Refugio Hinojosa near the town of Miguel Aleman, federal police said.

The incident appeared to be the result of a confrontation between two criminal gangs, Tamaulipas Attorney General Irving Barrios Mojica told journalist Carmen Aristegui in an interview for her radio show in Mexico. Aristegui is also the host of a show on CNN en Español.

He said some of the victims had been wearing “tactical vests with military-type uniforms” and bullets were found nearby that came from weapons typically only used by the military.

Authorities believe the cartels used explosives and grenade launchers in the skirmish. One of the vehicles left at the scene was described as a white pickup with Texas license plates and makeshift armored plating. It featured logos to pose as a vehicle used by the Mexican Navy. The Northeast Cartel has a long history of using cloned uniforms and equipment to blame authorities for their atrocities.

Investigators believe grenades and incendiary devices were used by the Northeast Cartel to overwhelm the Gulf Cartel’s armored plating techniques.

The bodies of the 21 cartel gunmen and the burned vehicles were discovered by a Mexican Army squad assigned to Miguel Aleman, information provided to Breitbart News by Tamaulipas law enforcement sources revealed. The soldiers called nonmilitary authorities to report the discovery. A squad of state forensic investigators took custody of the scene to gather evidence and try to identify bodies. 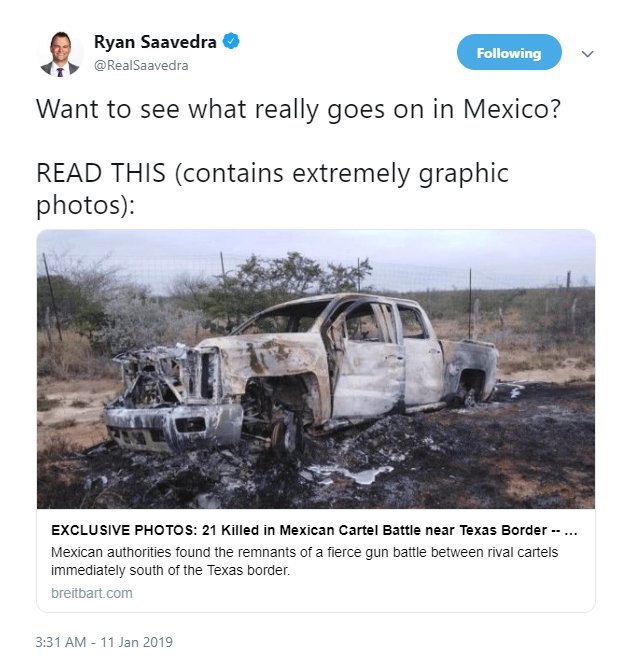 Even worse, the horrid atrocity took place about 50 miles from McAllen where Acosta was reporting. Perhaps Acosta would have had a more interesting report if he had actually tripped across the cartel monsters. Now that would have been a story and an end to his career. Again, karma.

Nope, no emergency to see here… just cartels killing tons of people right across the border. Move along folks.

As Reuters reports, areas near the border are “greatly fought over” by gangs as the victors then control the influx of arms, drugs, and traffickers into the United States.

Luis Rodriguez, a spokesman for state police, said in a statement that it appeared gunmen from the Gulf Cartel had fought with members of the Northeast Cartel, a group that split off from the Zetas.

Irving Barrios, the state’s attorney general, said in a radio interview that authorities found semi-automatic weapons and bulletproof vehicles at the site.

The area is “greatly fought over” by traffickers of arms and drugs as well as those who help undocumented migrants to cross to the United States, he said.

White House Press Secretary Sarah Huckabee Sanders took to Twitter to say the reason Acosta did not see evidence of a “national emergency” where he was looking was because there was a border wall in that area.

“I never imagined @Acosta would be there doing our job for us and so clearly explaining why WALLS WORK. Thanks Jim!” she wrote.

Meghan McCain Blows Up on Air! Censorship for Her But Not Navarro?
Trump Brings Border Rancher on Stage to Give Nancy Pelosi a Message