He has claimed more than one victim. This needs to go viral. He needs to be caught!

I’ve seen the video. It is horrifying. I won’t post it. The man is very clear that he’s choosing someone at random. First, here’s an interview with the victors family.

I just spoke with a man and woman who said the man killed in the FB live video was their 78 year old father @cleveland19news pic.twitter.com/Gpf3EUafLM

RRV is still working on gathering more information. Again I will not post the video directly here, but I will provide a link. PLEASE VIEW AT YOUR OWN RISK. [This video continues to be taken down. Be aware this video may as well]

At the beginning of the video he says as he gets out of his car, “I just found somebody I’m gonna kill.”

He walks up to a very old black man, and says, “hey can you do me a favor? Can you say Joy Lane?”

The man, confused, repeats the name.

And the scumbag says, “she’s the reason uh, this is about to happen to ya.”

He pulls out the gun and says, “how old are you?”

The man tries to cover his face defensively. And he shoots. 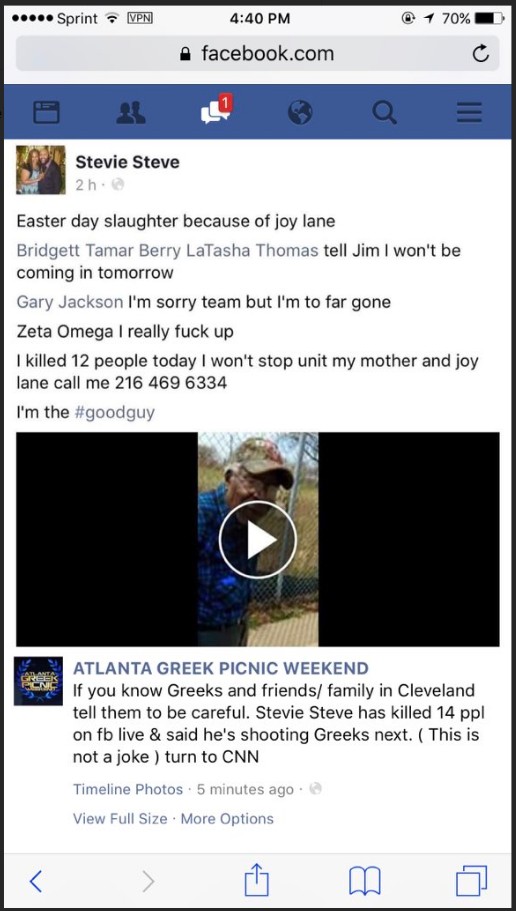 The Cleveland Division of Police is searching for the suspect who shot and killed a man live on Facebook Sunday afternoon.

The murder happened on East 93rd in Cleveland. Police said the shooter broadcasted the deadly shooting live on his social media page and claimed to have committed other homicides. Police are still investigating those claims.

Cleveland police identified the suspect as Steve Stephens. He is 6 foot 1, bald with a full beard. He is wearing a dark blue striped shirt. According to police, he is driving a white or cream-colored SUV.

The suspect is considered armed and dangerous.

If seen, do not approach. Call 911 immediately.

Allen West at UC Santa Barbara: Don’t Apologize for America [Video]
Religion of Peace’rs Chant “Death to America and Israel” Then This Happens