She slipped up and tried to cover it up – so Cruz brought it crashing down on her.

Ilhan Omar is shaping up to be the worst decision Democrats have ever made.

She’s been making terrible arguments for the Democrats. But she recently said something she had to feverishly delete immediately.

But nothing disappears on the Internet. This is what she said: 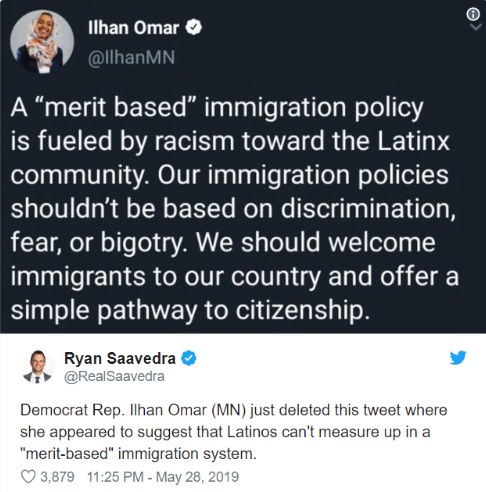 Hmm… sounds like she’s saying Hispanic immigrants aren’t educated or qualified to meet merit-based standards. Because she is.

Republican Senator–and son of Cuban immigrant–Ted Cruz had something to say about that.

Wow. Omar thought she could trash the president. But she ended up insulting millions of people. And Ted put her in her place!

A merit-based system means that skilled, educated, and qualified people will be able to enter the country.

That’s a good thing for America and immigrants. Only Democrats seem to want to keep good, skilled people out of this country.

We need good people to come to America. And we need to get rid of our broken immigration system that hasn’t worked for decades.

Thank goodness for leaders like Ted Cruz, who will stand up to the Democrats and support real improvements to our country.

This isn’t the first time Twitter has gotten her into some very hot water. Check out the video for more information:

Breaking! Man lights himself on fire in front of the White House
What?! Hillary Clinton to serve as keynote speaker at cyber defense summit