On Friday, Representative Alexandria Ocasio-Cortez (D-NY) responded to mass shootings at two mosques in Christchurch, New Zealand by calling out those who expressed “thoughts and prayers” in sympathy for the victims, and she did it in a tweet.

“At 1st I thought of saying, ‘Imagine being told your house of faith isn’t safe anymore.’,” she tweeted.

“But I couldn’t say ‘imagine.’ Because of Charleston. Pittsburgh. Sutherland Springs.

“What good are your thoughts & prayers when they don’t even keep the pews safe?” she concluded.

At 1st I thought of saying, “Imagine being told your house of faith isn’t safe anymore.”

But I couldn’t say “imagine.”

Because of Charleston.
Pittsburgh.
Sutherland Springs.

What good are your thoughts & prayers when they don’t even keep the pews safe?pic.twitter.com/2mSw0azDN8

What kind of monster would make a statement like that about thoughts and prayers for victims of gun violence in a house of prayer?  My God, from what bowels of Hell did Ocasio-Cortez come?

For some time now anti-gun/pro-gun control people have responded to mass shootings by openly making fun of others who use the expression “thoughts and prayers.”

It took the New York Congresswoman 47 minutes to realize she had to backpedal on her remarks.

“Thoughts and prayers” is a reference to the NRA’s phrase used to deflect the conversation away from policy change during tragedies. Not directed to PM Ardern, who I greatly admire.”

(“Thoughts and prayers” is reference to the NRA’s phrase used to deflect conversation away from policy change during tragedies. Not directed to PM Ardern, who I greatly admire.)

Yeah, that’s what she meant. #EyeRoll

Progressives are godless creatures whose only mission is to fight toward the goal of all progressives, and that collective goal is to destroy the American system and replace it with utopian heaven on earth.

The goal is all-encompassing, but any compartmental fight is attributed toward the main goal.  In this case, the goal is believing that the government taking away guns will create a utopian society where gun violence is a thing of the past.

Yeah, I know she didn’t verbatim say she wanted to take away guns from law-abiding citizens, but for what other reason would an elected congresswoman insult hundreds of millions of Americans who are people of faith and those who believe in the Second Amendment?

That is the underlying message the Cenk puppet made.  Her backpedal only came after the backlash she received, and she chose to attack the NRA, a source of anger and bitter resentment by those who want to take away your guns. New Zealand doesn’t even have an NRA.  It looks like she reached out to the progressive collective for help and was advised to blame it all on the NRA.

New Zealand has more restrictive gun laws than those in the United States. It is not yet clear how the murderer, or murderers, obtained the weapons used in the attack.

A report by the New Zealand Herald indicated that an armed Muslim man “chased the shooters and fired two shots at them as they sped off” from one of the sites targeted.

Ocasio-Cortez also re-tweeted a claim that President Donald Trump had inspired the shootings: 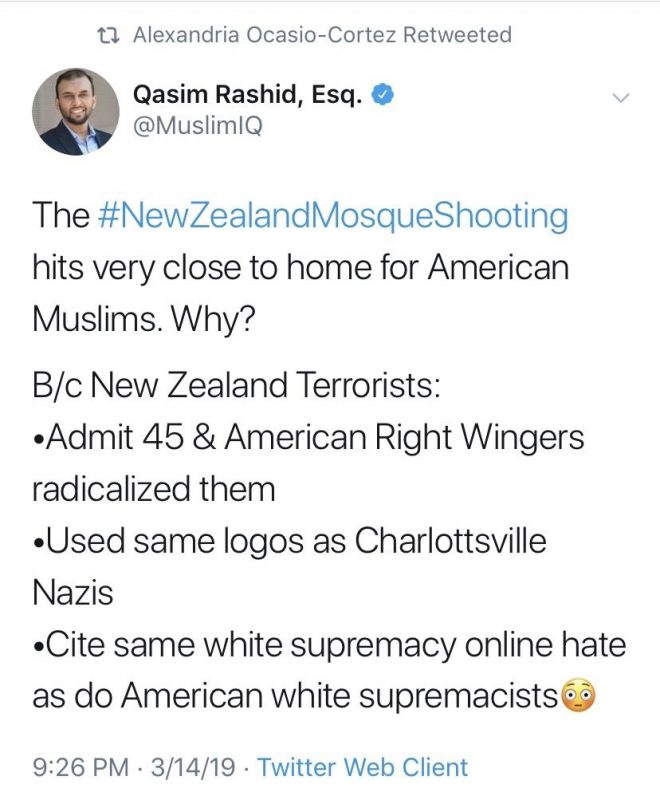 Thoughts and prayers are a standard way Americans express empathy and sympathy for people facing a hardship. After that, offerings of physical help usually follow. Ocasio-Cortez used a tragedy like this to go political and score some points.  What she really needs to do is learn when to keep her mouth shut and keep her thoughts to herself.