Tiffany Trump has been vacationing in Europe with her boyfriend, but took a day off to lounge around with her mother Marla Maples, both filling out bikinis in a most pleasing way.  They were on a luxury yacht, anchored off the coast of Capri.  These pictures leave no doubt where Tiffany got her killer body from.

While Donald Trump and Donald Jr. are in the midst of the Russian crisis, Tiffany Trump and her mother Marla Maples have been sunning themselves aboard a luxury yacht off the Italian coast.

Tiffany, the president’s youngest daughter, was snapped enjoying a carefree vacation with Marla on Saturday.

Both mother, 53, and daughter flaunted their enviable figures in bikinis aboard the 130ft charter yacht Mirage IV, which is moored off the coast of Capri, Italy.

Donald Trump’s ex-wife Marla sported a lilac bikini, before taking a break from the sun with a white cap and sleeveless white jacket.

Her daughter wore a mismatched white bikini top and green patterned bottoms as she enjoyed a drink in the sunshine.

The 23-year-old took a dip, accompanied by her Secret Service agents, to cool off before the pair were joined by some friends on deck. The group were spotted chatting and posing for pictures on the luxury yacht.

There is plenty of room on the Mirage IV charter yacht that the mother-daughter duo seems to be calling home this week, however, leaving them with plenty of room to share the space with their friends.

The Princess boat can house up to 10 guests in its five cabins, and also comes complete with a crew of eight, meaning Tiffany and Marla’s every wish will be catered for during their stay.

Although it is not known whether Tiffany and her mother have rented the yacht personally – or indeed been lent the vessel – the duo were pictured enjoying a relaxing morning on-board on Tuesday, with a make-up-free Tiffany kicking back in a white towel robe while her mother relaxed in some workout gear.

The pair were joined by two male friends as they sat down at a table at the back of the charter yacht in the harbor of Capri, the location of Tiffany’s third European trip in as many weeks, having already enjoyed trips to Berlin and Hungary with her boyfriend Ross in the past few weeks. 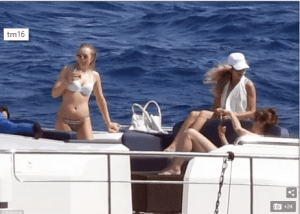 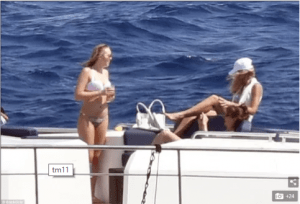 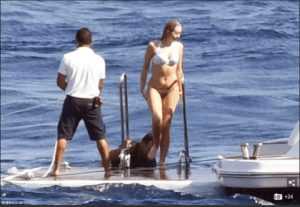 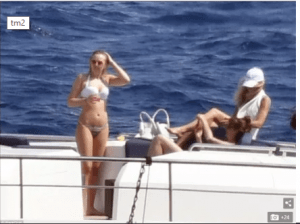 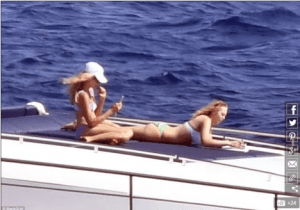 Pelosi Triggered During Her Speech And Starts Spasming, But All Eyes On Guy Right Behind Her
OOPS! Obama Campaign Manager Slipped And Published Anti-Trump Strategy