From Far Left Watch: “One Twitter user, claiming to be a member of the far-left militia organization, Redneck Revolt, quote tweeted Emily saying that he “didn’t join Redneck revolt for no reason”, the implication, of course, being that he is “down” for armed political violence.

“Redneck Revolt is mostly comprised of Communist, Socialists, and other far-left activists. They claim to have over 30 active cells nationwide and until recently they offered a downloadable guerrilla warfare manual on their website that included sections on “kidnapping”, “executions”, and “terrorism”.

“The recent spike in violent rhetoric from the far-left is not a departure from the norm, it is a return to it. Far-left political ideologies, like all forms of authoritarianism, are fully dependent on the use of violence from their proponents and ultimately from the state which they always seek to expand and grant more centralized power. Considering that just over a year ago a far-left extremist opened fire on a GOP Congressional baseball practice game, I sincerely hope our reporting results in an investigation by the authorities.” 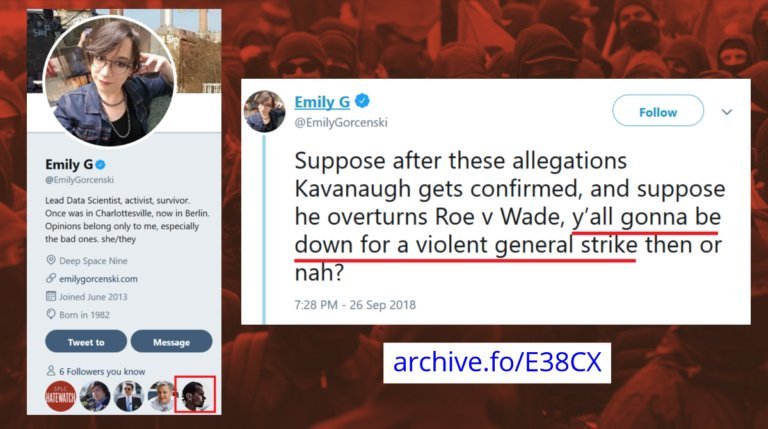 From Newsweek: “An Antifa activist compared the Immigration and Customs Enforcement to the Gestapo and called for the slaughter of “the fascistic Border Patrol dogs and their bosses.”

“The author also wrote that he hopes this “chapter in American history will also include the moment when revolutionaries rose up with the masses and slaughtered the fascistic Border Patrol dogs and their bosses, slaying them with revolutionary fire and justice.”