Boerne resident Kyle Courtney apparently has some beef with ABC News and how they’ve reported on President Donald Trump. So much beef that he bought a large billboard ad to make public his fed-upness, reading: I grew up with you. We are through. The Russians didn’t elect Donald Trump. I did. 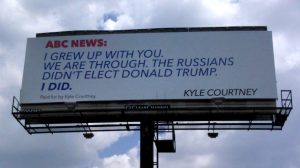 The billboard is located on I-10 and Buckskin Drive and, as reported by News4SA, will be up for about two months.

While there were a lot of people who appreciated the sentiment Courtney shared in the conservative state, there were some leftist detractors who didn’t like what he had to say. Courtney elaborated more on what drove him to make this message in a statement made to News 4 San Antonio:

“ABC News was the only channel I watched as a child growing up in Texas but I think they have lost touch with America and forgotten the working man. They don’t represent our voice anymore. Hillary Clinton’s presidential campaign was funded by the Clinton Foundation in close coordination with the media, and now we’re seeing them try to fix what they couldn’t fix during the election. They are doing everything they can, night after night, to create narratives and sway people’s direction to impeach Donald Trump. Our democracy is at stake when a major political party and the media are in bed together. I’m not asking anyone to boycott the Democratic party. I’m not in the brainwashing business, but the liberal media is.”

Courtney paid for the sign himself and a spokesman for his great American company, Wellstar Groundwater Technologies, told the news station that the billboard will be up for about two months. He may keep the sign up longer and switch the message to something new if he decides to do so, which we think would be a great idea.