The ironic part of actor/activist Jim Carrey’s latest painting was that the Far-Left are typically the ones that want everyone to follow the leaders and not step out of line. But now, Carrey’s “art” puts that practice in the hands of the Republican-controlled government.

Carrey’s latest subject of his pop-art paintings was none other than the First Lady herself, Melania Trump. 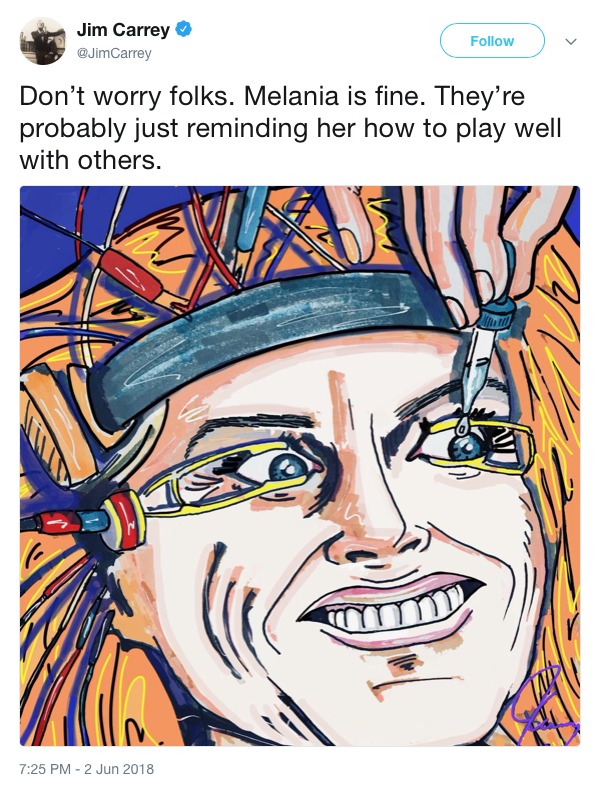 Is it just me or does Carrey’s portrait of Melania Trump look nothing like her?

It kind of looks like Carrey portrayed the First Lady as if she were a torture victim of the “Thought Police” in George Orwell’s novel “1984.” The crazy part — as if Carrey has parts of himself that aren’t crazy — is the extreme irony of someone not falling in lockstep with the prevailing ideology.

If you ever disagree with anyone on the Far-Left, you get called every name under the sun. I should know. I’ve been called everything from a “Nazi” to a “mansplainer,” and I don’t have nearly the exposure that Carrey has.

Crazy knows crazy, and Carrey’s portraits cater to those that have lost their minds. There really isn’t much more to be said, because Carrey does a good enough job of being a low-information person all on his own.

It’s bad enough that so many celebrities have become liberal activists since Trump was elected, using their public platforms to perpetuate hate with divisive messages they constantly share. However, Carrey has just outdone them all and apparently doesn’t seem to care if he has an acting career left after this. Afterall, he can always pursue his dream of being a repulsive political artist after debuting his latest in a series of hateful pieces he’s recently created.