The drug fentanyl has its uses. They gave it to me briefly after surgery. But it’s become the suburban junkie’s favorite way to OD and the stuff is deadly.

The U.S. Customs and Border Patrol just seized the largest haul of fentanyl in U.S. history… enough to kill over 57 million people. It was under the floorboards of a tractor-trailer hauling cucumbers while trying to cross the Mexican border at Nogales. A drug-sniffing dog was their downfall. Tucker Carlson broke the story.

“Well, the U.S. border patrol has made the biggest fentanyl bust in history. An enormous amount, enough fentanyl to kill—they estimate—57 million people. That’s more than the combined population of the states of Illinois, New York, and Pennsylvania. It’s a lot,” Carlson stated.

“We got our hands on an internal memo from U.S. Customs and Border Patrol that details this bust. The biggest fentanyl seizure in U.S. history,” Fox News Correspondent Hillary Vaughn stated. “According to the memo, four days ago in Nogales, Arizona, at the port of entry, CBP officers stopped a tractor-trailer crossing the U.S.-Mexico border into the U.S. with enough fentanyl to kill 57 million people. That’s plenty of fatal doses to wipe out the entire populations of Texas, Arizona, and New York state combined.”

“The shipment was referred to secondary, where an intensive examination revealed the contraband concealed within the trailer floor,” CBP said in a report. Authorities said it was driven by a 26-year-old man who was arrested and charged with possessing drugs with the intent to distribute them. 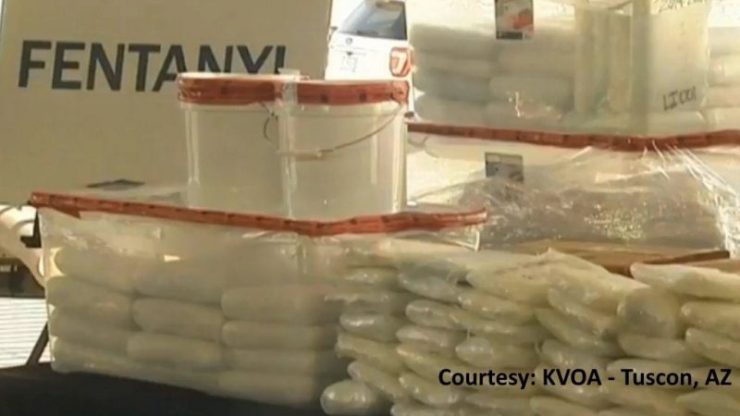 “They found this under the floor of the trailer. They found 114 kilograms of fentanyl. According to the DEA, just two milligrams is considered a lethal dose. They also grabbed 179 kg of methamphetamine and one gram of fentanyl in pill form. The street value for the fentanyl was over $102 million. The CBP officers arrested the smuggler, a Mexican national who attempted to drive the drugs across the border. The suspect was a part of the DHS’ trusted traveler program called FAST, that stands for free and secure trade for commercial vehicles. The program started after 9/11.”

The Chinese produce fentanyl and sell it to us. I don’t know if it’s being produced by the cartels in Mexico but it’s sure being moved and sold by them. This is just one shipment… imagine what we’ve missed that is already here.

This drug bust comes just as President Trump is trying to secure the funding for the border wall for national security purposes. It would also put a stop to a lot of the drug and human trafficking going on here. The Democrats call the wall “immoral.” What do you call enough drugs to kill 57 million Americans? I call that criminal and murderous as fentanyl killed approximately 28,400 Americans in 2017. According to the Drug Enforcement Administration, the drug is up to 100 times stronger than morphine.

Many times drug users buy fentanyl thinking its heroin and then OD on it. Most of the illicitly produced fentanyl in the United States comes from Mexico evidently. That wall can’t go up soon enough.

Senate Republicans Ready to Sell Out on Immigration

Ukraine Calls for Peace After Money Laundering Scheme is Exposed