Finally, we’re starting to see some real evidence and confirmation of the frɑud that took place all over the country.

One of the states that has been really at the center of focus is Arizona.

In a newly released email, we know that election officials explicitly told workers to give voters sharpies.

First and foremost, I want to thank you all for supporting this historic election. From my seat in the Command Center today, I finally had the chance to marvel at the numbers and feel unbelievably grateful for all of you working so hard in support of democracy. Thanks isn’t good enough, but THANKS!!

Next, we’ve heard you and we know you’re hearing issues and concerns about the Sharpie Markers. Starting tomorrow, 10/23, and through 11/2, we are asking that Clerks hand voters BALLPOINT PENS rather than markers. We NEED to use Markers on Election Day, but for now and through 11/2, hand voters a Ballpoint Pen. You have plenty of pens in your supplies right now.

Please message this to your Inspectors and ensure they cascade this change down to everyone on the Board.”

This is a massive problem because the instructions explicitly state, “Do NOT use a sharpie type pen as it will bleed through.”

According to the voter frequently asked questions in Pima County, they explain why Sharpies should not be used:

The ballot system used in Arizona is an optical scan system. The ballots are tabulated by optical scan readers. The readers are machines that have been calibrated to read the markings on the ballots. The type of ink that is most likely to be recognized by the reader is blue or black ball point ink. Other colors of ink may or may not be read by the tabulator depending on the ink formula mixture used by the ink manufacturer. The safest choice is a simple blue or black ink ball point pen.

Since ballots frequently have issues or candidates printed on both sides of the ballot, you want to be certain to use a marking device that does not “bleed through” to the other side since this could cause the bleed through marking to be interpreted as a vote. We therefore strongly suggest that you do not use felt tip markers such as magic markers or Sharpies. Stray marks of any kind should be kept to a minimum. Once again, the safest choice is a standard blue or black ink ball point pen.

They knew that most Trump supporters would vote on Election Day and not before, though I do know many who voted before that day.

It was something I was even recommending people to do. The mail-in ballot process wasn’t to be trusted, but little did I know that they would do something like pull a stunt like this. It’s not surprising though.

I personally know several people that live in Arizona that mentioned this before it became a controversy. 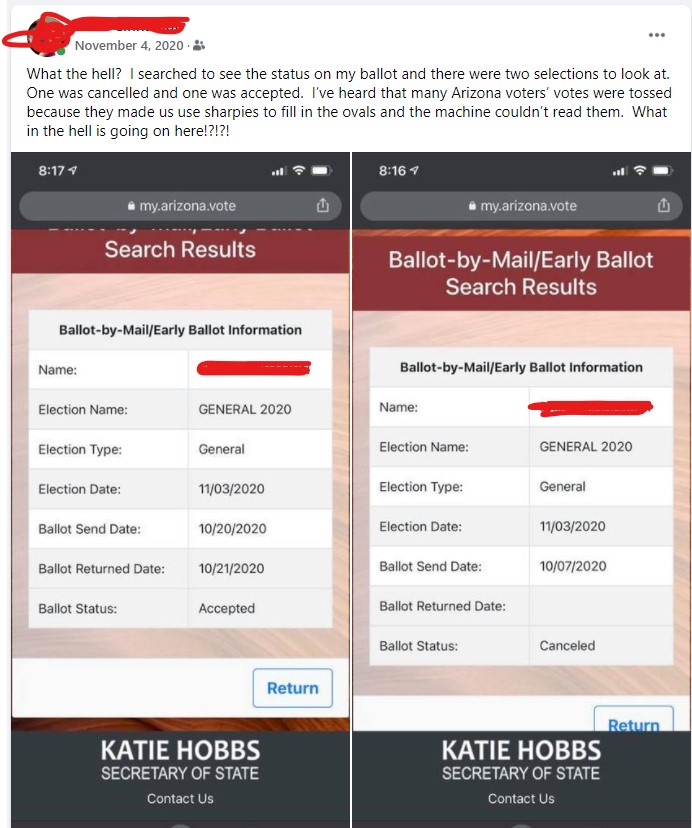 WATCH: Biden Caught Snapping at Kamala After Trying to Tell Him What to Do

CDC Quietly Revokes COVID Test Emergency Use Authorization, Wait Until You See Why