The United States has reached a point where approximately 65-70% of the population is now vaccinated against COVID.

That is a significantly high number relatively speaking, but there are still more than a dozen other countries that have higher rates that we do.

The United Arab Emirates is holding onto that lead with around 95% of the entire country being vaccinated already.

But one country that is close to the top, in the number 5 position actually, is Singapore. Their vaccination rate is hovering around 85% right now with 82% fully vaccinated.

However, there is something very wrong in Singapore. With nearly the entire population having been vaccinated already, their total number of new cases has skyrocketed to the moon. I mean BIG TIME. Look at this chart: 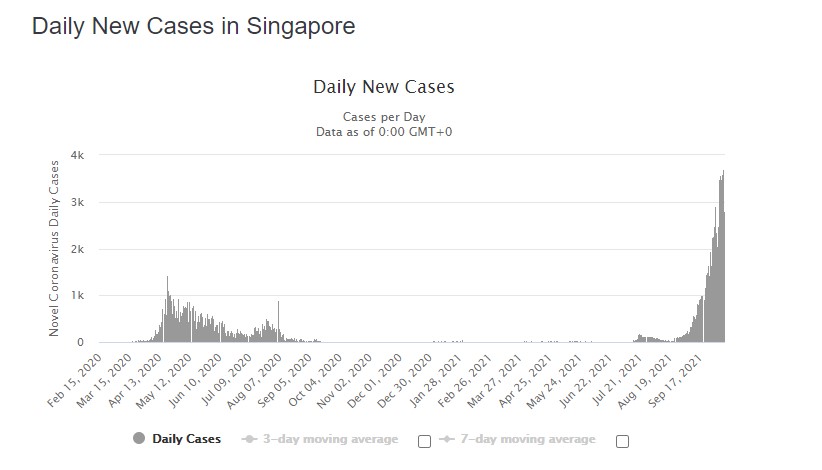 Could some scientist explain to me how a country that had nearly eradicated the virus from their country and has among the highest vaccination rates in the world, have such exponential growth of new COVID cases recently?

This should be impossible if the thing does what it’s supposed to.

After vaccinating over 85% of its population, Singapore 🇸🇬 finally flattened the curve, but along the wrong axis: pic.twitter.com/jHjczPGooE

Look, get vaccinated if you want, or don’t, I personally don’t care because I should have no say in what you do with your medical decisions. That is a choice you make. All I’m saying is that this lie that they’ve been feeding us about this vaccine essentially being the magic bullet that will return everything back to normal is a lie and Singapore is evidence of that in real time.

It can reduce severity of the illness, at least that’s what some reports say. I’ve also seen other reports to the complete contrary. We’re not left in a good position here. It could be a damned if you do, damned if you don’t sort of thing. But the one thing I can say with certainty is that you should take care of your bodies and make sure that you are absolutely healthy enough to fight this thing because it may come to a point where we all just have to get it at some point.

China’s Biological Weapon Can Kill You, Based on Your DNA