Flashback! Syrian Survivors Message to the World as He Cries With Joy After Trump’s Air Raid [Video]

Sometimes, I like to be reminded about the good things in life. And I know that, for the time being, the time of Trump has come to an end, let us never forget that he was the President and indeed much of the world actually wanted.

With the utmost respect and kindness, this Syrian Survivor Cries With Joy After Trump‘s Air Raid and gives a heartfelt account of the air raid the happened in Syria last night. Listen as he tells the CNN host how they have been begging for help and Trump finally helped them. She tried to derail the conversation by saying that there are many that do not approve of what Trump did. As he replied, with all do respect, he advised her she was wrong.

The interview surfaced not very long after Trump’s speech on our attack of the airbase in Syria. He stated,

There can be no dispute that Syria used banned chemical weapons, violated its obligations under the chemical weapons convention, and ignored the urging of the UN security council.

Years of previous attempts at changing Assad’s behavior have all failed and failed very dramatically. 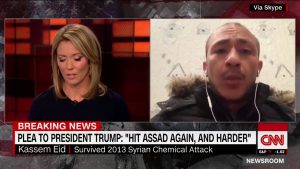 Tonight I call on all civilized nations to join us in seeking to end the slaughter and bloodshed in Syria, and also to end terrorism of all kinds and all types.

Watching this Syrian Survivor Cries With Joy After Trump’s Air Raid fills our heart with hope!

Senate Republicans Ready to Sell Out on Immigration

Ukraine Calls for Peace After Money Laundering Scheme is Exposed